Dutch painter Charley Toorop (1891-1955) was a member of the artist's group "The Signal" which aimed at expressing a deep sense of reality through the use of strong contrast, accentuated lines and intense coloration. It was a style of painting based on a philosophy that is sometimes called "moral realism."  Toorop believed that art had a moral responsibility to human life "...and that the human condition was an esthetic condition, for it involved imaginative wonder at the givenness of life. Without such imaginative wonder life seemed peculiarly unreal, inconsequential, and banal, and we remain humanly incomplete. For...Toorop the task of art was to awaken this wonder ..."realize" the wonder in the inevitable facts of life, and thus the wonder of our own all too human lives." (Donald Kuspit.)

Toorop was the daughter of Javanese-Dutch artist Jan Toorop and the mother of three children including painter Edgar Fernhout (1912-1974). In this painting Toorop immortalizes the three generations of artists, with a portrait set in her studio in Bergen. She and her son hold their palettes. Her late father is represented by the inclusion of a large portrait head sculpted by John Raedecker (1885-1956) Interestingly, Edgar Fernhout's son Rik Fernhout (b.1959) is also an artist...so in fact a newer version of this family piece could incorporate four generations. In addition, Toorop's other son John Fernhout was a filmmaker.  That was some very strong art gene passed down from Great-Grandfather Jan! 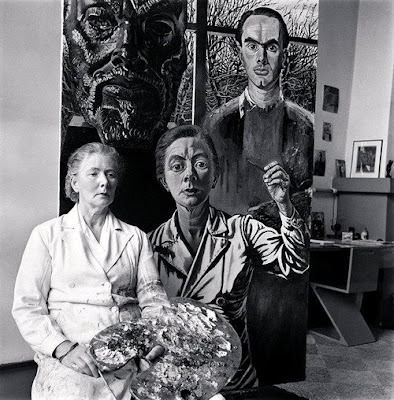 This painting was an instant visual "hit". In 1950, not long after its completion,  Toorop's daughter-in-law the well-known Hungarian photographer Eva Besnyö (1910-2003) took a shot of the artist in front of what has since become one of the most iconic Toorop pieces.