Sandra Gonzalez (b.1986) was raised in Tamaulipas, Mexico, emigrating to the United States in 2000 with her family. Her artwork springs from the intertwining of her Mexican heritage and her American culture. Her style reflects this with colorful Mexican-American patterns and symbols of both cultures. Traditional Mexican fabrics and tiles inspire her work and the artist states that she sees fabric "as a social metaphor where each garment is a collection of individual fibers forming a group/society." She feels passionately about helping communities with her art, often involving them with the painting process.

Sandra studied studio art and printmaking at Texas A & M University and received her MFA in 2013 from the Pennsylvania Academy of the Fine Arts. Full disclosure: Sandra was one of my classmates and friends in the MFA program at PAFA! I always loved Sandra and her work, and so I was thrilled to discover she'd recently created a piece I could include in my Women in the Act of Painting project! After graduating from PAFA Sandra was hired by Philadelphia Mural Arts where she became enthralled with the whole concept of mural painting. In particular she was inspired by mural artist Betsy Casañas with whom she has worked on several projects.

Eventually returning to her home state of Texas, Sandra now works as a High School art teacher and continues to create public art large and small. She's completed several mural projects in the past few years, unifying neighbors, friends, students and families who work together on her projects.

This particular piece (shown above) was part of the Electrical Box Project commissioned by the Marina Arts District and completed in January of 2017. The box is located at Mesquite & Williams Street in Corpus Christi, Texas. The box is covered with the bright colors of embroidered flowers, and tiles. One side features the artist's beloved grandmother, and the other side (pictured) shows her young niece, Kira, in the act of painting. "I have always been inspired by the women in my family." Sandra says.  The juxtaposition of age and youth explain the work's title, "Nuestra Pasado/Nuestra Futuro" which translates as Our Past/Our Future.  While I don't usually use photos in this blog that display anything but the artwork itself, this charming shot of Sandra's niece jubilantly playing her violin next to the mural bearing her likeness was simply too charming to pass up! So, since I'm on a roll, here's another, of Sandra showing the other side of the box mural.

Sandra Gonzalez's website can be found here. More up-to-the-minute photos of the artist's work can be seen on her colorful Instagram account.
Posted by Nancy Bea Miller at 11:41 AM No comments: 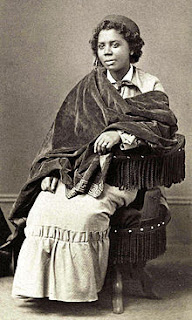