In this painting entitled "Le Dessin de l'Ombre" ("Shadow Drawing") contemporary french artist Francine Van Hove addresses an ancient story concerning the origin of painting. The story has several variations, but essentially runs like this: in Ancient Corinth (an area of Greece, about 600 B.C.)  a young woman was heartbroken to learn that her beloved was heading to war. He visited the girl's family home to make his farewells the evening before he was due to leave, and tired out from the preparations of the day he fell asleep by the fire. The young woman noticed the fire casting a perfect silhouette of her beloved's profile on the wall. Inspiration struck and picking up a piece of cooled charcoal from the edge of the fireplace she traced the young man's silhouette on the wall, in order to have his likeness near her when he himself had departed. This young woman's father was named Butades (or in some versions of the tale, Dibutades.) He was a potter by trade, and inspired by his daughter's ground-breaking act, he copied the perfect silhouette she had drawn, only in clay, creating the world's first bas-relief.  For some reason it is he who often gets the credit as the founder of the visual arts, though in fact all stories agree it was his (nameless) daughter who made the actual first marks.  In any case, in this piece, Van Hove has set the scene in a contemporary studio, substituting a standard electric clamp-light for firelight, and both "the maid of Corinth" and her beloved are played by attractive young females.

Van Hove (b.1942) studied in Paris and originally got a fine arts degree aimed at qualifying her to teach the fine arts. After one year of full time teaching in Strasbourg she resigned her position and returned to Paris where she has lived and worked ever since. Her work consists of drawings and paintings that focus almost exclusively on lovely young women in enigmatic or dream-like poses. She has said of her work, "Plus j'essaie de capter la beauté, plus son mystère m'échappe, et je me suis prise de passion pour cette poursuite même " (my own rough translation: The more I try to capture the essence of beauty, the more its mystery escapes me, and I am left only with my passion for the pursuit.") Van Hove has had more than forty one person shows, and her work has been exhibited around the world. She is represented by Galerie Alain Blondel, Paris. Her website can be seen here.
Posted by Nancy Bea Miller at 7:20 PM No comments:

Japanese artist Hosoda Eishi (1756-1829) made this portrait of the courtesan Hanaogi, one of the most renowned courtesans of the Kansei era (from about 1789 to 1801.) Hanaogi was celebrated not only for her beauty but for her exquisite brushwork and painting ability. Despite her "stardom" and her high ranking in the cadre of minutely organized brothel society, it can't have been a way of life she desired: Hanaogi is known to have tried to run away on more than one occasion.   She actually escaped from the tightly patrolled pleasure district in 1794 but was caught and returned. Hanaogi was a favorite subject for major artists of her time like Utamaro, Isoda Koryusai, Eisen and many others.

Hosoda Eishi is reported to have had a high-ranking Samurai family background. It's unusual for artists in the Japan of this period to have such a privileged lineage. The career of artist at that time was considered to be no more prestigious than that of any average tradesperson. The reasons behind Eishi becoming an artist (apart from his obvious talent) are not known.

Patricia Watwod (b.1971) is a contemporary painter based in New York City. Originally from St. Louis, Missouri, she attended Trinity University in San Antonio, Texas, studying drama and scenic design. Finding her interests beginining to focus on the craft of painting she moved to NYC to study with Jacob Collins at his Water Street Atelier. She concurrently enrolled in the graduate program at the New York Academy of Art, graduating from that school in 2000 with her MFA.


Watwood has said of her own work, " The style of my work is called Contemporary Classicism, and is connected to a current international flowering of realism.... [This style is] grounded in the mastery of historic methodologies, including academic draftsmanship and oil painting techniques. Like classical music, the discipline has a long and rich pedagogy.  Practitioners expect to train rigorously for a decade in order to prepare for our careers. This is the study I have embraced with others who champion figurative painting and the tradition of western oil painting."

Watwood now lives in New York City with her husband and children, and is an adjunct professor at the New York Academy of Art. Her work has been exhibited world-wide. Her most recent exhibit was "Venus Apocalypse" held at Dacia Gallery in NYC, June 6-July 15, 2013   Additionally she is represented by Grenning Gallery and John Pence Gallery.

Posted by Nancy Bea Miller at 10:31 AM No comments:


French painter Suzanne Valadon (1865-1938) may be one of the few artists ever to begin her working life as a circus acrobat. A serious fall from a trapeze ended her performing career at the age of fifteen, and after she recovered she found work as an artist's model. An intelligent as well as an attractive young woman, she took an interest in the work the artists were producing, and soon began drawing and painting on her own. Recognizing her talent and drive some of the artists she'd befriended such as Henri de Toulouse-Lautrec gave her lessons and encouragement. Edgar Degas was also supportive of the young artist, buying her work and giving her advice and introductions. She was the first woman painter admitted to the Societe Nationale des Beaux-Arts (in 1894.)

Valadon was a free spirit, and in 1898 she gave birth to a baby boy, later known as the artist Maurice Utrillo whom she tutored and assisted with his career. She did such a good job that eventually her son's fame outshone her own, but she was still a very successful artist in her own right, respected by her peers and financially successful in part through her skillful management of Utrillo's career. Her oeuvre included all manner of genres including still life and portrait and she became especially well-known for her portraits of nude women, a highly unusual choice of subject matter for 19th century female painters. Her female nudes still intrigue viewers today possibly because of their bold execution and idiosyncratic emotional content...the women may be nude but they are strong and in control of their nudity. They are not merely pin-up girls or shadow servants of "the male gaze" but real people, with definite personalities, and seem to have agendas of their own. (In a way, Valadon's work prefigures the work of 20th century artist Alice Neel.) In this later-life self-portrait at age 62 we see her unflinching measuring stare, and glimpse the curve of her palette, as she dispassionately considers herself as both a woman and an artist.

Over the years she had many affairs and later in life she married twice, each union ending in divorce, but never had any more children. She was extremely fond of animals, and kept a pet goat and a succession of beloved cats, some of whom have made their way into her paintings. She died at age 72, still successful and respected. Fittingly, for such an unusual person, she now has an asteroid and a crater of Venus named after her in addition to the usual handful of streets, public squares and etc. Her work hangs in major museums world-wide.

Posted by Nancy Bea Miller at 9:36 PM No comments:

Contemporary painter JaFang Lu (b. 1976) came to the U.S. from Taiwan. She studied at the City College of New York and also received a merit scholarship to the Art Student's League. She relocated to Philadelphia to study with Nelson Shanks at Studio Incamminati, where she now teaches. She is represented by Artists' House Gallery. More of her work, both still life and figurative, can be seen on her blog here.
Posted by Nancy Bea Miller at 7:45 PM No comments:


Vera Mukhina was one of the most famous Soviet artists of her generation, male or female.  She is sometimes called the Queen of Soviet Sculpture.  Mukhina (1889-1953)  was born in Riga, Latvia. Her mother died of Tuberculosis when she was only eleven months old and her Father moved the bereft family to the Crimea, to live by the sea, considered a healthier environment. However, he himself died when Mukhina and her older sisters were just finishing up high school.  Relatives stepped in and took the girls to live with them in Moscow. Although the move was necessitated by a tragedy, the change of circumstances allowed Mukhina to begin studying art at a much more serious level than previously envisioned.

A talented student, she studied for a time in Paris, as well, but when WWI broke out she returned to Russia and trained as a nurse. While working as a nurse she met her future husband, surgeon Alexey Zemkov. After the war they married and Mukhina found herself able to focus seriously once more on her art. By the early 1930's she was teaching at the state sanctioned art academy, Vkhutemas, and working on major pieces in her atelier. In 1937 her famous work Worker and Kolkhov Woman was exhibited at the World's Fair Exhibition in Paris.  It was a monumental  78  feet high and believed to be the world's first welded metal sculpture.

Mukhina's pre-eminence within the Soviet art world would be hard to over-emphasize. She won the Stalin Prize five times and was appointed People's Artist of the USSR in 1943. There is a museum of her life and work in the Crimea, and a street in Moscow is named after her. As an artist who straddled both cubism and social realism her career contains elements which fascinate art historians to this day. 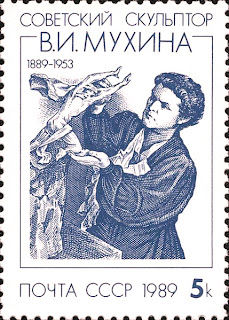 The painting of Mukhina by Russian artist Mikhail Nesterov (1862-1942), has also been used as the basis for a Russian Union stamp issued in her honor in 1989.

Posted by Nancy Bea Miller at 10:53 PM No comments: